Growing up in the small town of Pearcedale in south-east Melbourne, Cam Sinclair found his path in life riding motorcycles. At just five he began competing all over Australia, winning many state and national titles in the process. Despite championship winning promise, motocross and supercross racing just wasn’t paying the bills. With encouragement from a close friend, Sinclair began performing Freestyle Motocross demos during the part time intermission of the Australian Supercross Championship. The FMX world became a means to an end and make it from race to race. Sincs got the opportunity to perform weeklywith the Crusty Demons of Dirt Tour and began his full-time FMX career. Three years in FMX and Sinclair became a heavy hitter on the world stage of Freestyle Motocross; setting a world record for the official longest distance motorcycle backflip. Soon after, he became the third person ever to land a double backflip on a motorcycle and went on to make history as the first person ever to do one a full-length competition run (in Fort Worth Texas, USA in May 2009). Suffering the loss of close friends and inspirations, Sinclair’s path to success was not always a smooth one. However one dream never died: to compete and win the the X Games; scene as the biggest action sports event in the world. Just one week before his X Games debut, Sinclair’s life would hang in the balance. Whilst competing in Madrid, Spain, Sinclair under-rotated the Double Backflip. The crash left the 24-year-old with internal bleeding, massive head injuries and multiple broken bones. The extent of his injuries were unknown and Spanish surgeons worked to save his life. Follow Cam’s struggle through intense rehabilitation, where learning to walk, and talk take precedent over fame and fortune. Then witness one of sport’s greatest comebacks and ride with him on his journey back to the top of action sport and against all odds, achieving his lifelong dream. Twice: The Cam Sinclair Story is a compelling documentary of courage, mateship and determination. 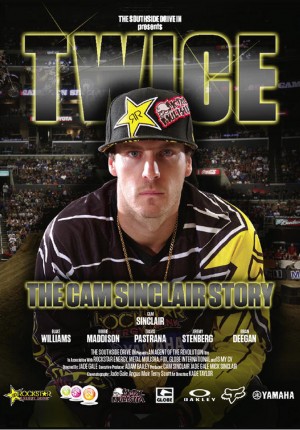