MONTREAL and FROSTED FLAKES were perhaps the most comprehensive DVDs released to date, and their follow-up proves a similarly colossal achievement, with significant extra footage and a multitude of worthwhile bonus features. Imagine a movie that consists of the best snowboard footage ever shot by Sunset Films. Sunset has re-opened its vaults to produce the greatest moments of Sunset Films since 2003. TOGETHER documents the evolution of Sunset Films and the uprising of snowboarding. This film consists of the most outstanding riders and never seen before footage and more…. 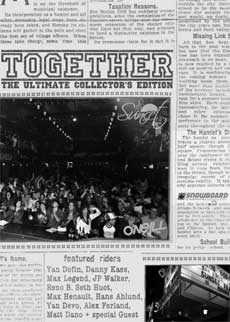