The sport of Stand Up Paddle seems to have popped up out of nowhere. The truth is, the sport has deep roots in both early Polynesian and Hawaiian History as it is truly a combination of outrigger paddling and surfing.

The first regular Stand Up Paddle enthusiasts were playing around in Waikiki as early as 1939, when Duke Kahnomoku used to stand up on an australian surf ski. Later, in the 60’s and 70’s guys like John Ah Choy and John Zapotocki used to do the sport regularly up into the late 90’s until they finally were getting to old to keep surfing. Around that Same time, Laird Hamilton and Dave Kalama played around with paddles on Maui and although at first no one seemed to take notice, it wasn’t long before the sport was attracting all sorts of users from all over the world.

Now, Stand Up Paddling is done almost everwhere there is water, and the sport has gone in multiple directions. Some people like the excercise and weight loss aspects in flat water, others like to race, and the most extreme are taking the boards out into the waves. Filmed in Hawaii, Fiji, and Tahiti, That First Glide is a must see movie for everyone and features most of the premier athletes that got the sport off the ground. 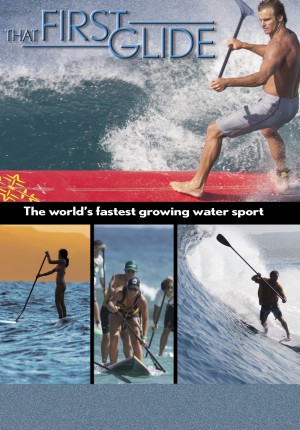