The Teddybear gang sets themselves apart from the beginning by delivering a ski film that is truly out of the box, a new style with a fresh look at insane action. Legendary film maker Kris Ostness (Wind-Up Films/Flying Circus) has teamed up with new school film maker Henrik Rostrup (Push Films/Not Another Ski Movie) to form the company Teddybear Crisis. The crew revisits the classic Utah gaps that Ostness/Wind-Up Films pioneered years ago and discovers a few new ones on the way.   Upper/Lower Flagstaff and Pyramid are all mandatory 90 foot gaps but pale to Tanner Hall hitting 120 foot Chad’s Gap skiing backwards at 53mph and stomping a switch 900!

Lots of travel, backcountry gaps and booters, supersized parks, gaps over half pipes, freeskiing in the Alps, Alaska, and Utah. Teddybear Crisis has it all in a well rounded movie. 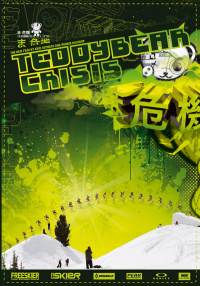