Over the last 5 years StuntWars has grown to be the World’s largest SuperBike Freestyle competition. All of the top riders from around the world come to one place to battle it out for the official title of who’s the best of the best. Join in track side as the world’s top stunt riders compete in the highest paying event of the year.

This video brings you up close and personal at the Lakeland dragstrip with all the best highlights from Longest Endo, Tandem Event, Craziest Trick, Longest no Hander, Individual Freestyle and the infamous team event. Never before has there been a video with better coverage of the world famous StuntWars competition. You have seen it on SpeedVision, you have seen it on MTV and in all the major magazines around the world, but never have you seen it like this. 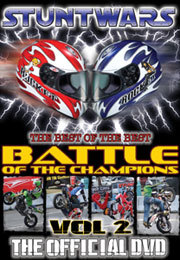