Surf kiting star Ben Wilson has followed up his popular action DVD, The Unknown Road, with his very own surfkiting instructional video. Now you can rip like Ben, even if you can’t travel to mysto reef passes in Indonesia all the time like he does. Besides all the instruction there is, of course, tons of action footage of Ben doing what he does best in best waves in the world.  Ben starts out with the basics, …more like what minimum kiting skills you need to have wired before you venture into the surf. He also covers kite and board selection, safety, and ocean elements to keep an eye on wherever you are. Then the basic principles of kiting in the surf are covered, like body position, getting out through the surf, taking off on your first waves and building your confidence to ride closer to the pocket. A bit of the differences between riding hooked and unhooked are discussed as well. And then it’s on to the maneuvers, starting with kite positioning in various wind directions. Finally it’s into the nitty gritty with all the moves you can do on the face of a wave. Ben really shines here as he breaks down the most subtle differences of board turns into different specific maneuvers. Some moves covered are bottom turns, top turns, combos, floaters, reo’s, slashes, tail slides, airs and barrels. Best of all he describes the best way to do all these things riding both backside and frontside.Be  You may notice Ben rides predominantly strapless, but there is no emphasis towards either style of riding. It’s your decision. Each of the topics covered receives equal weight and the video moves on rapidly, never becoming a boring instructional. This is a high-end surf instructional and it really gears you towards riding real waves down the line. It moves quickly away from the entry level basics into serious wave riding. Be ready to hit the lip 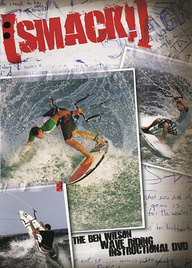