Sandbox has been developed by the boys who brought you the infamous Skids series of snowboard videos. Unique footage, good riding and fun are the focus once again for this crew. A bunch of young new faces and new sponsors mixed with even better production quality will give this project a great look and fun feeling. Andrew Hardingham, Kevin Sansalone, Jesse Fox, Tyler Lepore, Joni Makinen, Jordan Mendanhal together with some great up and comers like Dustin Craven, Mark Sollars, Paul Gonzalez, Scott Shaw, Brendan Keenan, Geoff Brown and Logan Short are the feature rides in this project. We have been out shooting in some amazing locations such as the Alberta Rockies, the Whistler backcountry, Mt. Baker, California, Utah, Alaska, South America and even Poland 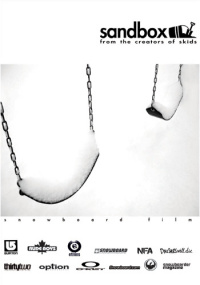