Raw The Movie is a new vision in surf film making, combining surfing, the art of cinematography, and a mindful use of editing that synchronises vision and audio. The film showcases a diverse range of professional and everyday surfing that has not been seen in years. Raw The Movie will inspire, motivate and just amaze surfers, enthusiasts and non-believers alike, to give it a shot and believe in the world around you, experience different cultures and see how the waves are meant to be ridden. This has been a project, two years in the making. In that time there have been some of the biggest waves ever surfed. Through Raw The Movie and its killer soundtrack you have the opportunity to lose yourself in waves that have to be seen to be believed and hear what the world’s best have to say about the conditions and their experiences. Winner of “Best Cinematography” at the New York Surf Film Festival Nominated for the “Best Film of 2013” at the Australian Surfing Awards 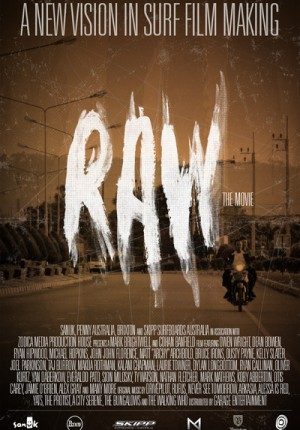