Get ready for the ride of your life and follow the recent path of the phenomenal platinum import racing series. The crew enters the Players Run, in which cars travel from new York to California exceeding speeds of 110 MPH all the way.

The import tuning company responsible for the popular MISCHIEF takes fans of street racing on an all-access tour around the world in DYNASTY, the fifth installment of the series. Several SUV’s (including the Hummer H1, Expedition, and Infiniti FX35) battle it out in the Hollister Hills off-road park, while the DTMPowerM3 takes the boys from New York City to the West Coast. With several obstacles (including weather, the law, and no windows or air conditioning), the drivers must sweat it out if they want to win the Players Run. Additional features include: the “Reckless Chapter,” the Woodward Dream Cruise, street racing in Japan, The SEMA show in Las Vegas, and several run-ins with local law enforcement. 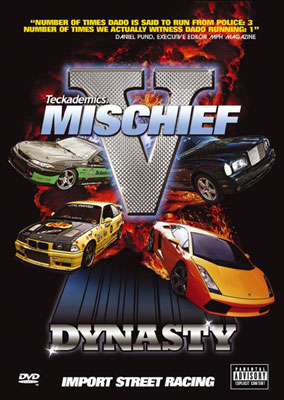