Welcome to the double life of Frank Solomon.

Let’s Be Frank draws together a cast of iconic surfers, including John John Florence, Jamie O’Brien and Pat O’Connell, with actors such as Cokey Falkow (Penny Dreadful) and Michael Redmond (Vikings), to tell a genre busting, multi-layered story of big wave hold downs, back street beat-downs and North Shore show-downs.

Up-and-coming Director Peter Hamblin has produced a trademark visual feast combining stunning cinematography with a fast-paced, edgy storyline. Juxtaposing a stylized 50’s colour palette with the crisp clarity of the coastal landscapes from South Africa’s Cape Town to a Mexican Pipeline, the gnarly North Shore of Hawaii to the Irish seaside resort of Bundoran, this feature film takes you on a journey across the globe and to the edge of reality.

Featuring an original score by three-time Grammy Award winner and surfer Ben Harper, with Jesse Ingalls & Jason Mozersky, Let’s Be Frank is an immersive experience navigating through the perceived worlds of one of the world’s most respected chargers on the planet. Frank Solomon is not your average surfer, and this is not your average surf film.

Mobile users: scroll down to the “Where to Watch” section to watch the movie on other VOD platforms. 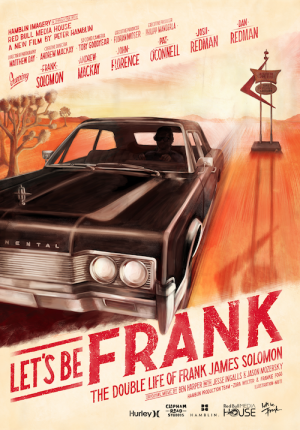