“Holding On”, our latest bodyboard film is now available to rent or download on international VOD platforms: iTunes, Google Play, ReelHouse, and The Surf Network.

Narrated by David Wenham (Blinky Bill, 300, Lord of the Rings, SeaChange), “Holding On” recounts the journey of 6 young men from Cronulla, who were united in the late 1980’s by the exciting new sport of bodyboarding. From humble beginnings and overcoming much adversity, they were labelled the Skid Kids and would gain worldwide attention for their reckless, no-holds-barred approach to surfing Shark Island, a wave previously deemed unrideable. Driven by the desire to push the limits in both wave-riding and life, the Skid Kids revolutionised board design, created innovative competitions and became infamous for their wild antics both in and out of the water. A classic Australian coming of age story, Holding On features never-before-seen footage and a killer soundtrack supervised by Parkway Drive’s Winston McCall. Mobile users: scroll down to the “Where to Watch” section to watch the movie on other VOD platforms. 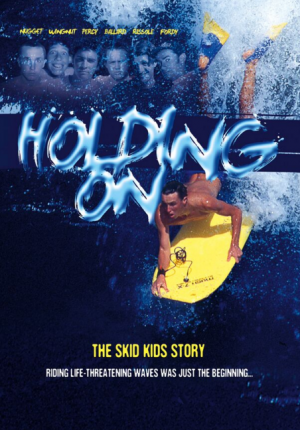