“High and Hallowed: Everest 1963” is the deeper story of the greatest Himalayan climb in American mountaineering history. Narrated by best selling author, and Everest veteran, Jon Krakauer, High and Hallowed takes us from the turbulence of America in the early 60’s to the solace of the highest mountain on earth where man pits himself against nature. Profiling the bold and visionary efforts of the 1963 American Mount Everest Expedition, the film examines the sheer commitment, step-by-step struggle and lasting impact of the first American ascent of Mt. Everest and the pioneering first ascent of the West Ridge by Tom Hornbein and Willi Unsoeld. Five decades later, a team of elite mountaineers journey back to Everest to attempt the same routes climbed in 1963 and discover if the essence of risk, adventure and the unknown that drew the first Americans to the summit still exists on Everest today. 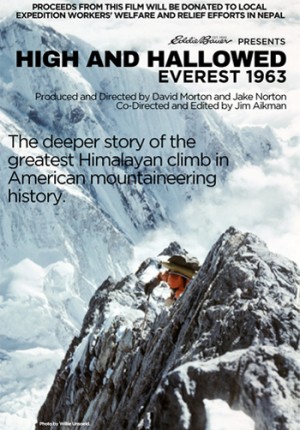