Burning Bridges is Kids Know’s second feature, and the follow up to their smash hit, loveHATE. Burning Bridges looks less like a football game and more like a skate video. The people in the film are mostly casual, fun-loving humans. When they all came together, it led to a lot of highs, and all of the lows. A new addition to the Kids Know team is a man named Daniel, who goes back and uses virtual reality cameras to improve every rider’s footage; thus enhancing everyone’s good time. We also guarantee the best soundtrack in a snowboarding film — ever. Burning Bridges will not let you down. It will be the last video you still watch in the future, when you’re sick of all the other videos you liked more than Burning Bridges when you originally bought them. 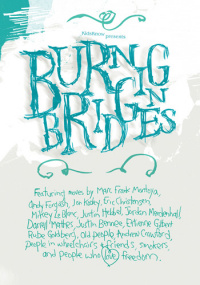