For two years the crew of 3 MINUTE GAPS have followed the world’s best mountain bike racers around the globe documenting them as they trained, prepared, rode, ate, traveled, raced, celebrated, commiserated, and made sacrifices simply because of the weight of ambition to be the fastest. There is no truer, more accurate and intimate of the hallowed worlds of the world’s very best than 3 MINUTE GAPS. Filmed in Australia, Brazil, Canada, Finland, France, Ireland, Italy, New Zealand, Slovenia, South Africa, Spain, Switzerland, United Kingdom, USA, and every round of the 2009 and 2010 World Cup Series and World Championships. Director Clay Porter has traveled the world capturing a story of triumph and struggle. From multiple World Champions to future World Champions – including Gee Atherton, Sam Hill, Aaron Gwin, Brendan Fairclough, Greg Minnaar, Sam Blenkinsop, Andrew Neethling, Danny Hart, Matti Lehikoinen, Ben Reid, and Josh Bryceland – this film chronicles the new breed of racers who are re-shaping modern downhill racing, and indeed, riding. This movie is more than a Post-It note stuck on a page of mountain bike history, it is a leather bound pop-up book printed on sheets of polished stone with a crystal ball for the contents. For years to come this movie will still be referenced in conversations and discussions about when riding was re-imagined. 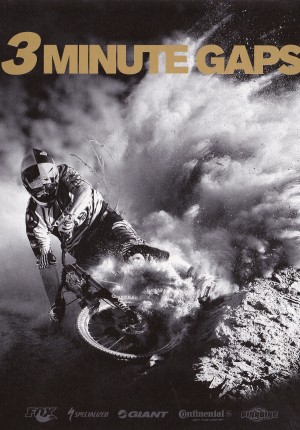