3Focus dives in headfirst to the madness that is the UCI World Cup, and doesn’t come up for air for nearly an hour. Insane high speeds, raw emotions and an eclectic soundtrack make 3Focus a truly entertaining account of life on the road, racing bikes. Stunning scenery, amazing camerawork, and revolutionary shooting techniques are all present, and combined with the pure energy of the racers to produce something pretty damn special. 2008 was the most closely contested world cup season in living memory, and 3Focus is the perfect film to bring it to your living room. From the makers of Focus, and re-Focus, Orpheus Productions brings you another adrenaline packed, intense, HD filmed mountain bike video that showcases all the rounds of the 2008 UCI World Cup series, along with the UCI World Championships. Orpheus has also included rider sections with big names like Matti Lehikoinen, Justin Leov, Sam Blenkinsop, Brian Lopes, Adam Brayton and many more 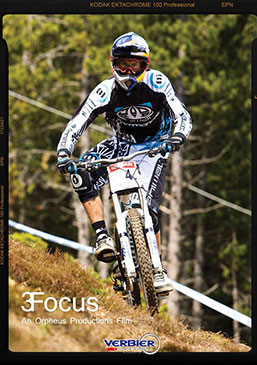